A car's fuel line pipe, with the engine in the front and the fuel tank in the back, usually runs under the floor, where it is vulnerable to corrosion and knocks. The article below shall discuss the fuel line pipes.

Here are the main points of the article:

How do you install a metal fuel line pipe?

What is the structure of fuel line pipe?

What happens when there is a fuel leak in the fuel line pipe?

1. How do you install a metal fuel line pipe? 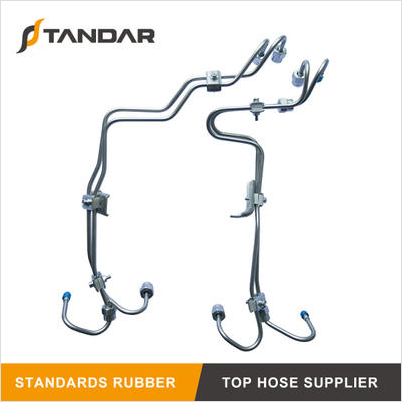 2. What is the structure of fuel line pipe?

The flexible part of the fuel line pipe is usually made of reinforced rubber tubing, but sometimes transparent flexible plastic tubing is used. The most commonly used type of joint for metal fuel line pipes in modern vehicles is a short length of hose, which is fixed at the end of the pipe by two hose clamps. Sometimes there is no paper clip and the connector is push-on. In some early automobiles, rigid joints were used on metal fuel line pipes, especially where they were connected to the fuel tank outlet. The pipe nut is mounted on the pipe and tightened to force the pipe against the "olive" - a piece of soft metal shaped like a hollow bead. The ends of the olives are flattened to form an oil-efficient joint. Sometimes there is no olive, and the tube nut forces a tapered seat on the end of the tube, dispersing into a bell-shaped tube end. Leakage can be caused by corrosion of steel tubes, various types of cracks and wear. A clamp that holds the fuel line pipe to the chassis may damage the chassis or rust away, causing the fuel line pipe to loosen. It can get dangerously close to the exhaust pipe. Pipes can also be damaged by stones on unbuilt roads, or even jacked up to the wrong place. In addition to damage to the pipe itself, joints may loosen and leak. Rubber joints may be worn or clamps may be loose. Leaks often occur when metal joints are pulled or pushed, causing the ends of the olives or expanded pipes to deform and no longer form an effective seal with the joints. Check it carefully every once in a while.

3. What happens when there is a fuel leak in the fuel line pipe?

A leak in the fuel line pipe of an automobile is a serious safety problem. Many people may wonder whether it is safe to drive a car with a fuel leak, because car repairs are often expensive. It is not safe to drive a car with a fuel leak. Fuel leaks are one of the main causes of car fires. The gas is highly flammable, so it is highly likely to cause a fire, either in the car itself or in the fuel left behind from the leaking vehicle. If a car catches fire and the driver and passengers are inside, they may be seriously injured or killed. Even if no one is in the car when it catches fire, anyone who gets close to a burning car can be seriously injured. Also, it is important not to smoke in a car with a gas leak, as smoking increases the risk of fire. In addition to the risk of fire, driving a car with a fuel leak can expose you to carbon monoxide. Carbon monoxide is a colorless, odorless gas that is toxic when inhaled. It is found in gasoline and is released when gasoline burns. If inhaled in small amounts, it can cause cold - or flu-like symptoms. If ingested in large quantities, it can be fatal.

If you own a car, you believe there is a safety defect in your fuel line pipe outside the warranty period, you should come in contact with us.